The lives of a couple from Wincanton have been saved after a carbon monoxide alarm went off in their caravan and now they are urging other caravan owners to check their appliances and fit one of the life saving devices.

Rick and Jeanette Wills, from the Henstridge area, narrowly escaped a serious incident after fumes from a gas fridge in their caravan caused the carbon monoxide alarm to sound. Having owned a caravan for more than 20 years, it was only after being given a detector by Wales & West Utilities at the Bath & West Show, that the couple took the steps to fit the alarm which turned out to be a lifesaver.

Rick, 61 who is a commentator at shows across Somerset, explains: “It was a chilly night and so we shut all the windows. In the middle of the night the alarm sounded and, not smelling anything untoward, I simply took it off the wall and put it under the pillow to try and stop the sound.

“As an afterthought I opened all the windows but upon waking the next morning we both felt dreadful. Not thinking it was anything serious I set about getting ready to go to work and soon realised I was talking jibberish.” 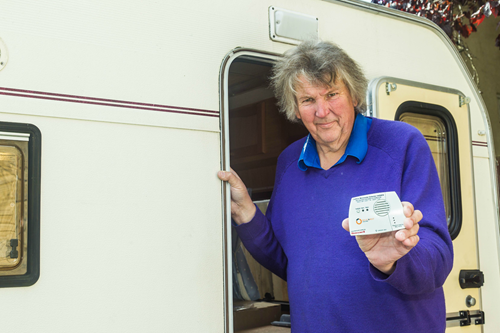 Knowing something wasn’t quite right, Rick set about investigating all appliances in the caravan and it was when he opened the fridge door and saw the gas flame burning white that he realised the danger they had both been in.”

He continued: “I immediately turned off the supply to the fridge and fully opened all windows and doors. I couldn’t believe how quickly the carbon monoxide poison had taken hold of us – thank goodness for the alarm – without it I’m sure we wouldn’t be here today.”

Rick and Jeanette are now urging other caravan owners to take the necessary steps to protect their own lives, he said: “We are so grateful to Wales & West Utilities for giving us a carbon monoxide detector. Fitting an alarm is a simple measure – they don’t cost a lot, are easy to fit and put quite simply, it saved our lives.”

Danielle Royce, Stakeholder Manager from Wales & West Utilities, commented: “The dangers of carbon monoxide are well documented and, along with Rick and Jeanette, we are urging all households and caravan owners to remain vigilant and to fit an audible alarm.

“Every year we make over 1,000 visits to properties where we find evidence of carbon monoxide. It’s important for people to realise that this is a poisonous gas that doesn’t smell, has no taste and can’t be seen - but it kills 40 people in the UK every year and leaves a further 200 seriously ill.”

Signs to look out for that show there could be a risk of CO include:

CO is emitted by faulty appliances powered by any fuel that burns – gas, coal, oil, petrol and wood. The symptoms from inhaling it include headache, dizziness, vomiting and shortness of breath. Sometimes people have ‘flu-like’ symptoms, but without the high temperature.

To protect against the risk of CO, audible alarms are important but there is no substitute for getting all appliances, powered by any fuel that burns, serviced annually. Householders should also make sure that chimneys and flues are swept annually too.

What to do if you suspect Carbon Monoxide poisoning

And if you do suspect CO poisoning, this is what to do: